THIS MAKES US SAD THAT THE ANCIENT ART OF NOODLE MAKING IS DYING OFF. 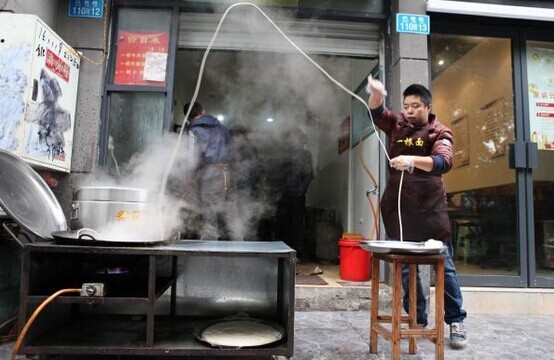 If you make your way to Chongqing’s Nan’an District, you can treat yourself to both a feast for your eyes and tummy. You will see a culinary craft and skill set that’s been handed down over fifty (count them-50!) generations. In fact, the Intercontinental Noodle House’s noodle making skills are so rare that it is in danger of dying off.

What’s so special about this noodle shop?

Deftly handled by the skilled hands of master noodle maker Zhaoming Xi, you’ll never look at the typical combination of noodle flour and a pot of boiling water quite the same way again. First, he spends around ten hours making the ‘face’ noodle. Ten hours. On noodles. I guess Mr. Xi hasn’t heard of this thing in the West called a ‘stand up mixer.’ Perhaps, the term ‘Kitchen Aid’ hasn’t made its way to the crowded streets of the Nan’an District just yet. Anyway, you can already tell that judged by sheer effort alone, those ten hour noodles should be damn good. Why ten hours? The noodle is one long piece. That’s right  – you would be eating one, extra long, noodle. Wait, there’s more…

Master Xi would fling the noodle’s end two to three meters up in the air and in a beautiful arc, the noodle would fall into a boiling pot of water. Thankfully, you wouldn’t have to wait ten hours for the noodle to cook. In less than two minutes, you have yourself a steaming bowl of some of Chongqing Province’s best-or best hyped-noodles.

When was the last time you ate one hundred year eggs that were, well, 100 years old? Probably never. If you did, you probably wouldn’t be reading this article. You’d be dead due to food poisoning. Chinese dish naming conventions have always been about large blocks of time. Maybe it is due to the Confucian element in Chinese culture that places a premium on the wisdom and experience of the ancient over the chaotic newness of the contemporary. Maybe it is just plain old-fashioned food marketing. Regardless, there might be a whiff of that same tendency to exaggerate, as far as the age of food traditions go, present in the case of Intercontinental Noodle House.

While I’m not saying that these noodles suck but come on. Let’s get real here. If you are looking for some acrobatics with your noodle making, I’m sure it’s fairly easy to get someone with the right acrobatic training to do some airborne shtick as they make noodles. As for the Song dynasty pedigree claim, there are many other culinary traditions in China that claim their origins from the far distant past. Again, I’m not saying these noodles suck but you really have to hand it to the folks at this Nan’an district noodle house for hitting the right buttons when it comes to appealing to tradition, a sense of culinary drama, and sheer dining entertainment value. Well played, sir!

THIS ADORABLE CAT WORKS AT A FISH STALL AND WEARS A COSTUME TO SELL YOU FISH.

THE GUIDE TO THE PERFECT “NOODLE” DAY IN HONG KONG

HERE IS WHAT I DID TO FIND MYSELF A POTENTIAL WIFE AT THE MATCHMAKING MARKET IN SHANGHAI.

COULD THIS BE THE BIGGEST BOWL OF NOODLE EVER?

WE ATE AT A NORTH KOREAN RESTAURANT THAT IS RUN BY THE NORTH KOREAN GOVERNMENT AND LIVED TO TELL ABOUT IT. HERE IS WHAT IT IS LIKE.

IN CHINA, THEY PUT DURIAN IN HOT POT.

HERE IS HOW YOU CAN TAKE A WEEKEND TRIP FROM SAN FRANCISCO TO SHANGHAI WITHOUT MISSING ANY MONDAY MORNING MEETINGS.