THE 5 BEST BOBA SHOPS ACCORDING TO TAIWANESE LOCALS.

In this day and age, regardless of what country you live in, Boba Milk Tea is as ubiquitous as McDonald’s. In most Asian countries, it is hard to NOT encounter a tea shop on every corner. In Taiwan, the country where boba milk tea originated, I would not be surprised if the number of boba shops outnumbered the collective number of McDonald’s, KFC and every other Western fast food chain out there. It is that common.

Hence, standing out in Taiwan is more difficult then being a guy in a nightclub in San Francisco. While we have seen our fair share of random ass promotions and even Buzzfeed has their own list of the “15 Must-Try Boba Places in Taiwan,” shit is just getting out of hand.

For the time where you want, you know, good boba, its comforting to know places like that still exists in Taiwan. Places that serve nothing but the freshest milk, the most authentic tea and the best boba balls. Thanks to OpenRice, locals in Taiwan have come together to compose the following list of the 5 best boba milk teas on the entire island. And no, Quickly doesn’t make the cut here.

Situated adjacent to the Keelung Train Station, LMama is often found crowded by students and locals who clamor for a sip of this sweet, sweet, milk, nectar. If you are just walking around the train station and not actively trying to look for this place, you are going to miss it due to its relative obscurity on the 2nd floor of a building. None the less, when you do find it, the 30 NT milk tea(less than $1 USD) will make you feel like a million bucks.

The boba milk tea at Chen San Ding is revered for its “Q“(loosely translated as soft and chewy) texture, a property that is prized in Taiwan but perhaps not so much in the Western world.  None the less, in boba-speak, that is a good thing as that means the balls are going to feel that much better in your mouth.  The boba are boiled in brown sugar but still come out mildly sweet rather than sickly sweet, which is great considering I’m trying to stave off diabetes. Netizens have come to call the boba balls at Chen San Ding as “black gold” but I’ll leave it to you to make that call. 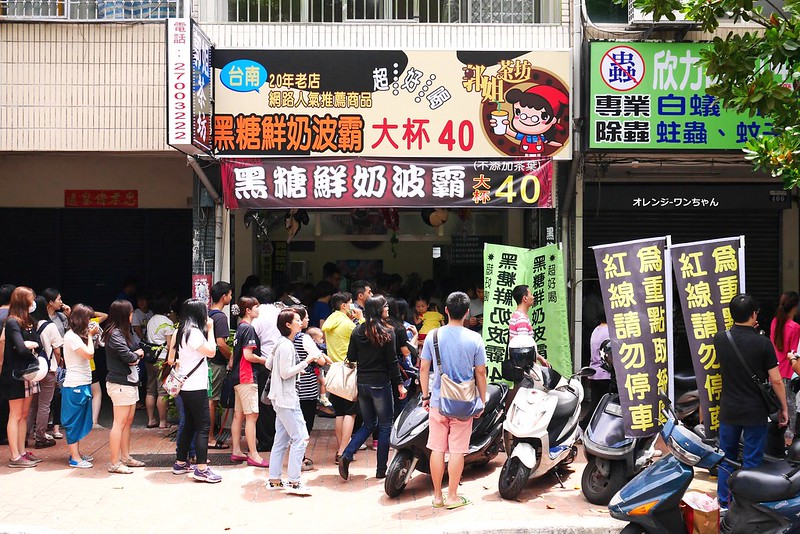 People wait anywhere from three to five hours just to get this shit. As we all know, the Taiwanese seem to have a penchant for lining up for things here and here. The fact that people line up for seemingly ubiquitous boba, tells you everything you need to know about this place. Additionally, seems as though you can also find the Guo sisters out in Tainan as their expansion efforts won’t effect their overall boba quality.

No longer just another boba shop out in Tainan, Queenny is fast becoming a force to be reckon with as it expands into multiple cities across Taiwan. Known for it’s legendary usage of fresh milk in its milk tea and also for its pearly white boba balls, the combination of the two leaves this editor in need of a weekend trip to Taiwan.  The golden caramel color of its boba is a sight to behold. Visitors have commented that just getting one cup is blasphemous and for real (boba)ballers out there, only two cups will suffice.

For over 33 years, Hua Da Milk Tea shop has been pleasing a bunch of people without the need for police intervention. The bamboo decor and the homey feeling of a neighborhood establish doesn’t detract from the fact that these guys mean business. Though the facilities are modern, the boba is old school and genuine.  For 45 NT($1.25 USD) you can get a taste of what boba is suppose to taste like.