THE 15 MOST BADASS SOFT SERVE ICE CREAM THAT YOU WILL ONLY FIND IN JAPAN.

THA few years ago, we saw a huge explosion in the number of soft serve ice cream joints open up across the US. In mostly predominantly Asian areas such as Los Angeles, New York and San Francisco, you couldn’t go a block without seeing a Pinkberry, Red Mango or some other knock off brand, setting up shop.

In Hokkaido, the soft serve ice cream reigns supreme and is renowned all across Asia for its creaminess. Locals swear by the fact that the Hokkaido milk is denser and therefore more suitable for ice cream making. Now, its not that uncommon to see your local 7-Eleven(in Asia) selling “in season” Hokkaido soft serve with huge swarths of people lining up to get a taste. None the less, the dazzling array of soft serves that exist in Japan is simply mind boggling. In Japan, vanilla flavor is for the uninitiated, whereas these 15 are for the badasses that exist in every single one of us. At first glance, this cone looks like its sprinkled with matcha powder. But no, in fact, that green stuff is actually what is known as ascetic garlic, a plant based seasoning that I don’t think I have ever seen before at 99 Ranch. Internet commentators have said that the garlic smell is not overbearing and you can barely taste it as the vanilla soft serve takes center stage.  Just don’t spill the garlic in your car as one Japanese netizen discovered. Apparently the smell gets into the upholstery and pretty much ruins any future date you may have.

Renowned for its oysters, the town of Okayama is known for its delicious okonomiyaki. Not content with just having boring ole soft serve, locals have combined their two food passions into one heaping monstrosity. Vanilla ice cream topped off with two fried oysters and sashimi soy sauce, this is one combo that people in Japan swear by.

Pay attention to that spoon!

Hokkaido is known for its fantastic seafood, so its no surprise that this soft serve is topped off with sprinkling of kelp powder. The spoon in the photo is, surprise surprise, actual dried kelp.  Slightly salty, but also creamy sweet, locals who have tried it swear by its creamy goodness.

Looks pretty cool to me. Even with the spring onions that is garnished on top of the ice cream makes this look like a legitimate noodle treat. In a nutshell, the udon soft serve is standard vanilla soft serve but squeezed out through a thinner tip. Some brave adventurers have upped the authenticity by adding soy sauce onto it.

Described as slightly salty, soy bean flavored and “mouth filling,” the miso soft serve found on Suyakame/すや亀 street in Nagano is a harmonious marriage between miso and vanilla. Not quite sure why “mouth filling” is considered a good thing, but apparently that is a thing in Japan. And yes, this Miso soft serve is very mouth filling. In fact, the most mouth filling of all the flavors. 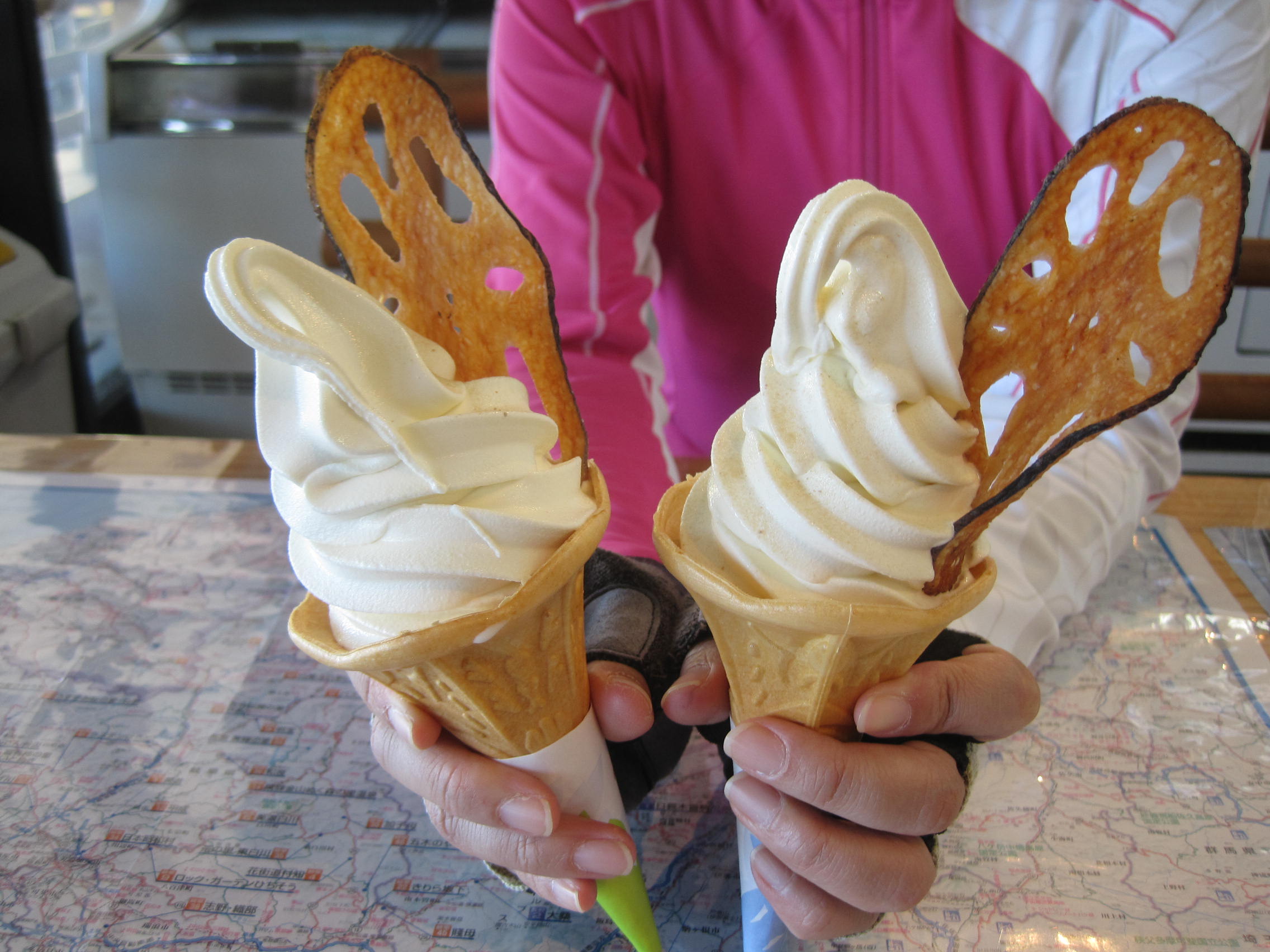 Rich in milk flavor, the lotus root soft serve is accompanied by lotus root chip making this probably the most fashionable soft serve on this list.  The taste is gentle and is reminiscent of soy beans mixed with heavy milk. Combined together to form an addictive team that will assault your taste buds and your wallet.

You can make a free booking at Yamasa’s website located here.

People who have tried this flavor mention that they anticipated licking into a fish taste/smell. Luckily, it doesn’t come with any of that but it does remind people more of shrimp chips, but in soft serve form.

Ponzu is a citrus-based sauce commonly used in Japanese cuisine. It is tart, with a thin, watery consistency and a dark brown color. For this soft serve, it is described as slightly brown(makes sense) with over 100 years of history. Let’s see if this generation of kids will allow it to survive 100 more years. Someone on the Tablelog website likened it to eating cheesecake. I’ll be the judge of that… some day. People on the internet have commented on whether the red demon soft serve is poisonous or not. Frankly they aren’t far off as the red is derived from spicy red pepper, which honors the Hells of Beppu otherwise known as the Blood Hot Springs in the Oita Prefecture.

Yes, it doesn’t sounds that appetizing, till you realize that tofu doesn’t really have a flavor to it. So keeping that in mind, its actually not as gross as it may originally sound.  Since tofu is made of soy beans and soy beans are considered a health food in Asia, then by that logic, this must be the healthiest soft serve around. So go ahead, have 5 of these puppies. 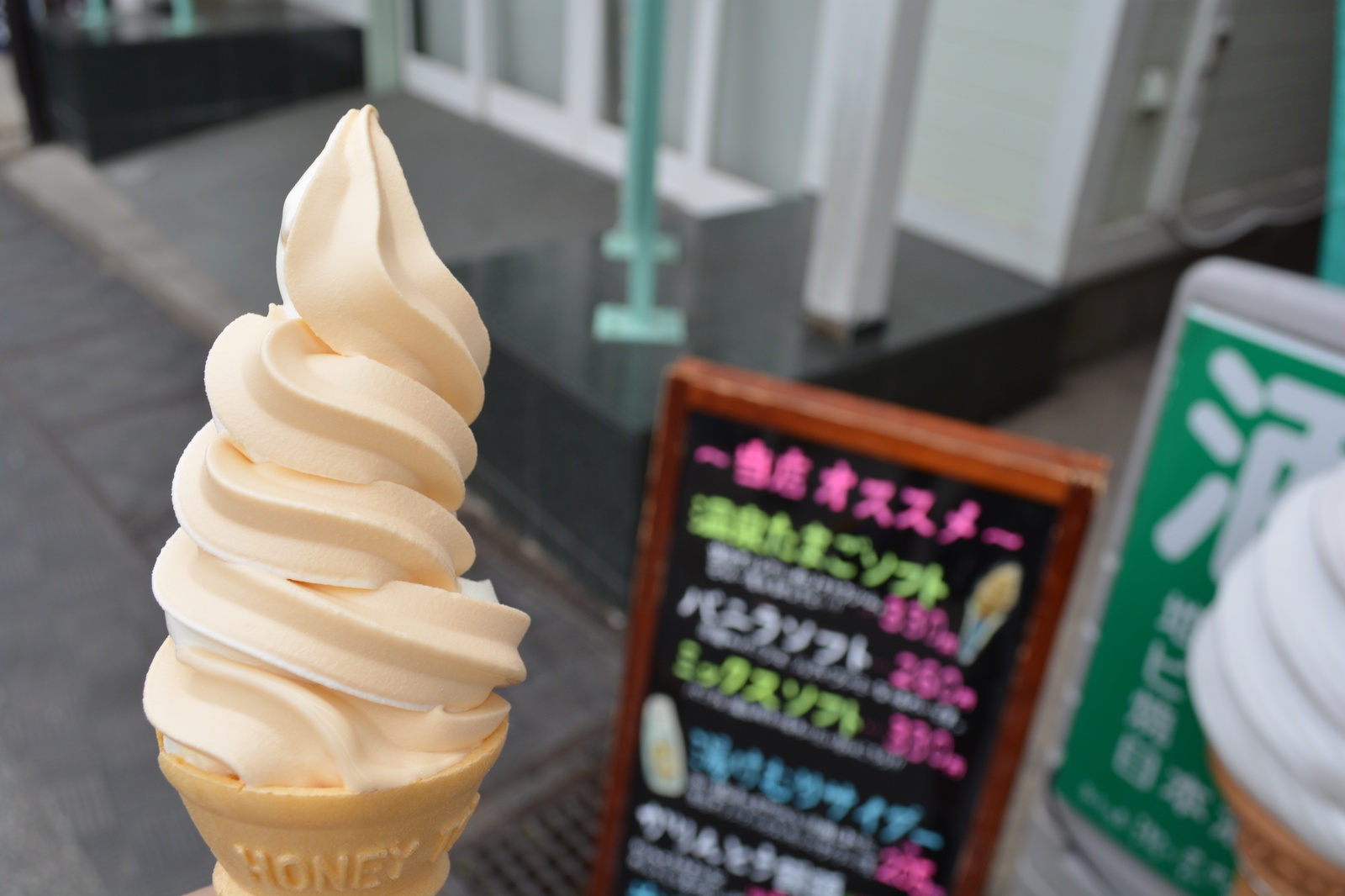 Although I have never tried this(but damn, I really want to) I would imagine the onsen egg soft serve to taste like cross between a pound cake and vanilla ice cream.  The fact that its made from hot springs eggs makes this soft serve much denser and in fact, reminds people more of a custard rather than ice cream.

Here in the western world, it would be more apt to find squid ink in a bowl of pasta instead of in an ice cream cone. Described as a delicious mix of vanilla with a slightly ink fragrance, the squid ink soft serve is unique for its odd black coloring.  Characterized as not having a fish smell or texture, this seafood and milk soft serve is pretty dope looking and can be found on many posts on Instagram. 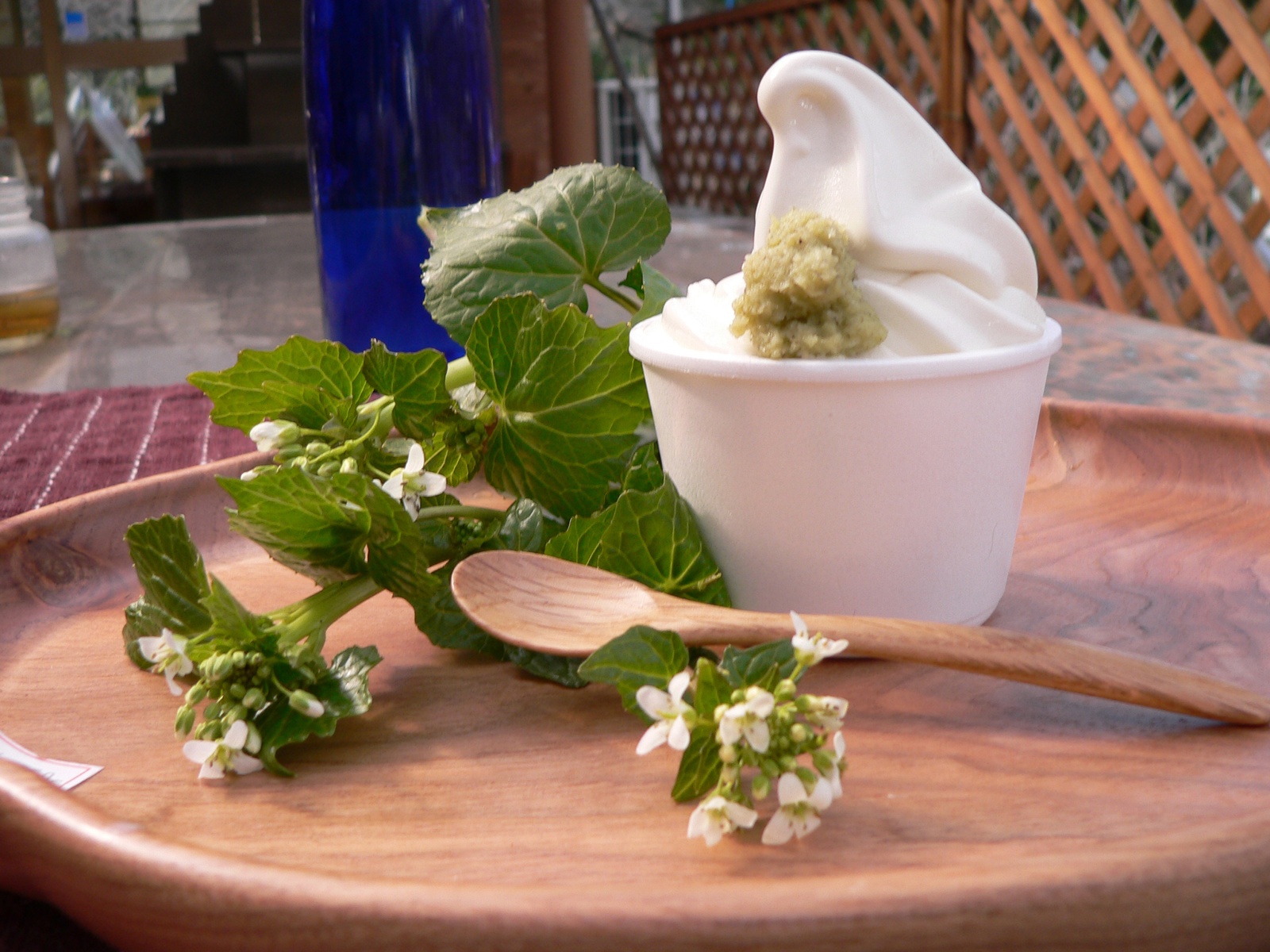